After the terrifyingly bizarre events in Kodari, we eagerly continued on our yatra. After crossing the border outpost in Kodari, we got in pre-arranged land-cruisers and our convoy of about 17 land-cruisers, cut through the Himalayas, climbed the mountain range to the town of Zhang-Mu, and onwards towards the Tibetan plateau.

The roads took us through pristine and dense green forests. We were treated to innumerable waterfalls along the way. In some places, concrete slabs covered the road, preventing erosion of the roads. In a couple of instances, we drove eerily through a tunnel of water. With oooohs and aaaahs at every turn, the trials in Kodari were quickly forgotten. In this accompanying pic, our driver stopped for us to take pics, and I noticed another of our vehicles winding its way up. It was early afternoon when we reached the edge of the tibetan plateau and the village of Nyalam.

The tibetan village of Nyalam was a tiny settlement at 3,750 meters (12,300 feet) elevation. The plan was to spend an extra day here to help us acclimatize to the rarefied air. We were put up in dormitory style housing with 4-6 people in a room. At the end of the hall was a bathroom for men, and another for women. It was cold (5-10 deg C; 40-50 deg F) and there was no hot water. The last time we showered was on the day we left Kathmandu two days earlier, and there would be no hot water arrangements anywhere till our return to Kathmandu in 10 days! As a consolation, we sweated less as it was cold. I also carried several boxes of body wipes and wore fresh undergarments daily, discarding used clothing.

I was astounded at the color of the sky; it was not just blue, but a deeper violet blue. Being at a higher altitude the incident angle of sunlight is lower and it doesn’t go through as much atmosphere. Further more, less pollution too makes the sky clearer. The featured image above was the view from our guest house on the first morning. Larger image here on Arun Eyes.

Nyalam had a population of less than 500, but the Chinese occupational authorities had made wide (and underused) roads. Sidewalks in this tiny hamlet were better than the best in Mumbai city, or many sidewalks in Boston suburbs. The china-fication of Tibet was going well. Street lights carried illuminated messages in large chinese script and tiny tibetan script. In a few years the tibetan script would be erased.

The village catered primarily to transient tourists like us. Most stores including the tiniest of convenience stores, were run by chinese wearing suits and ties. You could spot Tibetans in their traditional garb, selling vegetables or artifacts on sidewalks; or carrying bricks or stone for construction.

Here is a Tibetan home. A different family lives in the upstairs part accessible through the ladder you see in the front. During our walks I noticed kids scampering up and inside, while another family stayed downstairs. 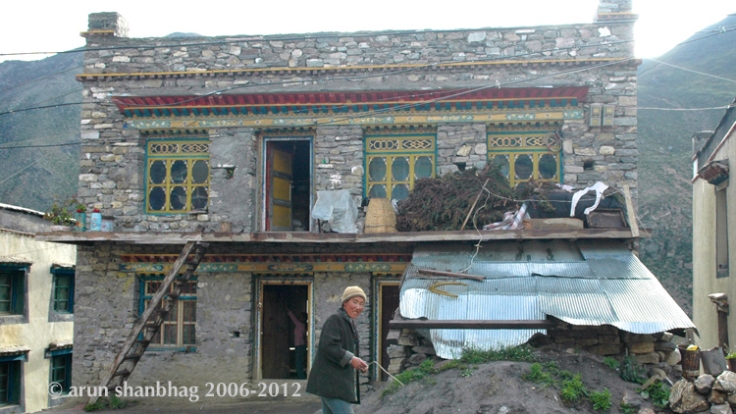 A well laid out Tibetan home. Apparently the Chinese are catering to tourists vying for Tibetan culture. All over the countryside you can see work crews building Tibetan-styled homes, adorned with Hindu / Buddhist symbols. 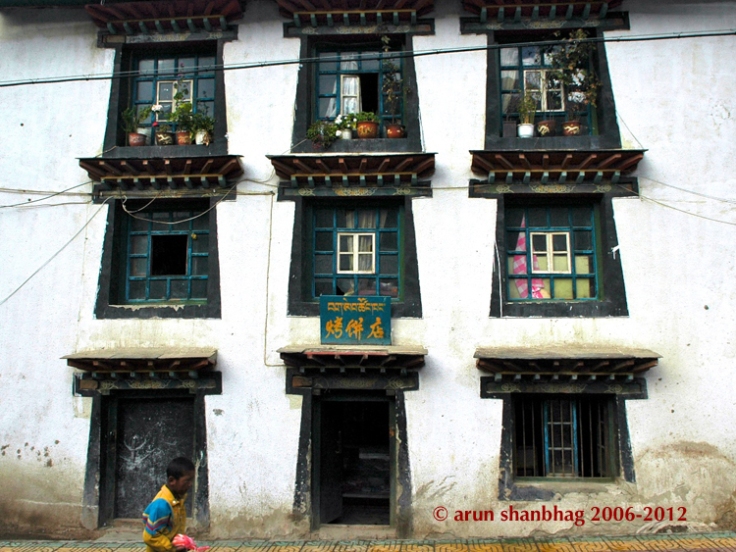 I noticed that most kids had bleeding noses. Apparently a physiological response to adapting to low oxygen levels and the resulting high pulmonary pressures. Sadly, complications from pulmonary hypertension are a leading cause of death in these high-altitude dwelling Tibetans and Sherpas. I also observed that kids (as well as adults) were apprehensive of tourists and particularly of being photographed. I attributed that to the history of chinese brutality. Tibetans clearly averted their eyes when Chinese passed.

A farmer’s shed along the mountains was covered with these cow/yak dung pancakes. These were similar to the ones at my grandmother’s house in rural Karnataka. Cow dung was mixed with chopped hay, made into large balls and flattened on the cow-shed. Once dry, these cakes were stored and used for small cooking fires. Here obviously they used yak-dung and I guess the pancakes likely also served to insulate the shed from the cold.

On the edge of town, underused sidewalks, wide roads and industrial equipment awaited under a pristine blue sky.

4 thoughts on “Respite in Nyalam”