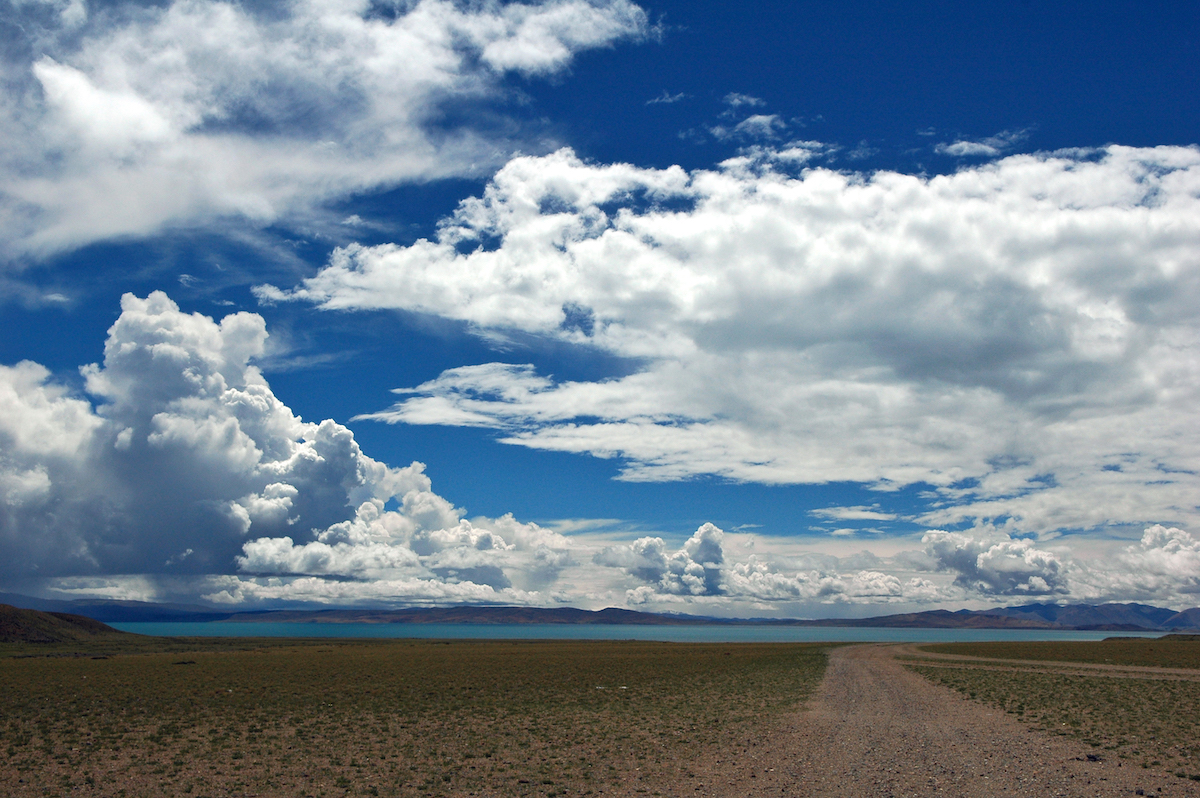 Over the six months I had planned this trip, I never gave much thought to the significance of going on a yatra (pilgrimage). I had signed up primarily as an adventure with my brothers and several of my cousins; to shoot fabulous pictures; and check off one more on my list of places to see before I die! That Lake Manasarovar and Mount Kailash were the most holiest of sites was only of passing interest.

But over the earlier two weeks as I started my travels from Boston to Mumbai, and then on to Kathmandu and across the Tibetan plateau, I wondered: What am I doing here? If all I wanted was to take pics, weren’t there easier places to visit? And both my siblings and most of my cousins canceled, except two second cousins. And my experiences along the way, seemed to have a transformative effect.

First, our terrifying experiences in Kodari, stuck between the mob and the trigger happy security forces crystallized the fragility of our lives here.Second, the beauty of the landscape! You only saw the 2-dimensional images. Imagine a vista which covers your entire sight and saturates all your senses. Everywhere I turn, I only see amazingly blue skies and majestic mountains. On this high altar, me offered to the Gods of this Universe. I was simply overwhelmed by nature. My breath would catch and words refused to form. Words would only have disturbed the silence, like ripples on a still lake. To speak was to disturb.

Third, the people were so beautiful. They had no money, and likely wore the same clothes for months on end. But their smiles radiated positive energy bringing shantih (peace and calm) to my heart.

And Fourth, I was sick and running a fever for most of the trip. Was nauseous, out of breath, incessantly coughing, sleepless and blurry eyed. And here in the remote wilderness I had to face my own mortality. I could easily die here somewhere! A slip, an overturned jeep, an accident, or an asthma attack at night and it would be over! Quickly. And the only way to calm my mind was to surrender.

Yes, surrender to destiny. I could not cheat fate. If death comes calling – so be it. I have lived a good life and gladly welcome the next. This surrender actually made me less paranoid and I tried to take more joy from the people and the environment around me. It could be my last, and no point being a sourpuss.

Now, as we spied the shimmering waters of the lake, oohs and aahs broke out in our vehicle. Our jeeps pulled over on a crest and everyone leaped out. I was overcome by melancholy and could not get myself to step out on this hallowed ground. I feigned sick and asked the others to let me rest for a while.

For most of my life, I have not been a good person! I could think back of all the vile things I did in my life. The grief, hurt and sadness I thrust on so many. So many friends I let down. So many I loved less than I could, and others, more than I should. Certainly I have lied, schemed and partaken of all vices. And yet, here I was given an opportunity to step into the crucible of Creation. Why me?Everyone in my family is more pious; and yet of both sets of my grandparents, I was the only representative to be here; all others had canceled shortly before the trip for a variety of reasons. Why was I the fortunate one? Perhaps because I had sinned the most, and “needed” this salvation the most? What does that say about the life I lived?

And for a while I wallowed in this self pity. While I cannot even start to grasp the workings of destiny – Here I was! And I had a responsibility. I carried best wishes from many near and dear. Many who themselves would never be able to make it here: My parents, uncles and aunts; M, my brothers and sisters and innumerable cousins and relatives. And friends. All had sent me off with their prayers. And all expected me to share my experiences on my return. In a sense, I was there for all those others, as much as for myself. My catharsis was certainly more acute, but they needed to share a sliver of the grace I experienced. I had to step out, and be baptized anew.

And I searched my oxygen starved brain for this short prayer:

Girdled in oceans and mountains, Covered by mountain peaks
Companion of Vishnu, Kind and Generous Devi
Forgive me, For I tread on thee!

And then I opened the door of the Jeep and stepped onto the banks of Lake Manasarovar (see above). It was not just me. As I walked around, I noticed many others, finding a quiet place and simply communing with the divine in nature. 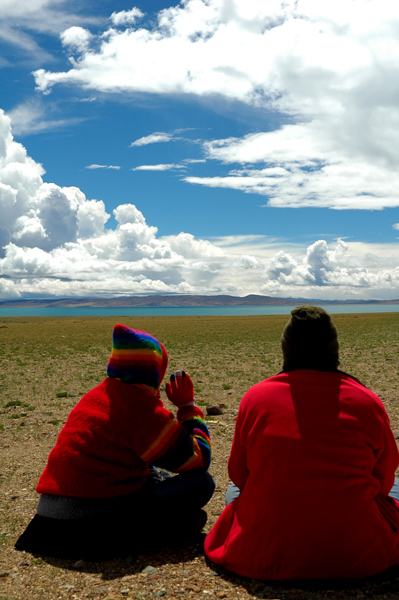 For a while, everyone seemed to walk around like zombies; each trying to find meaning in this experience. 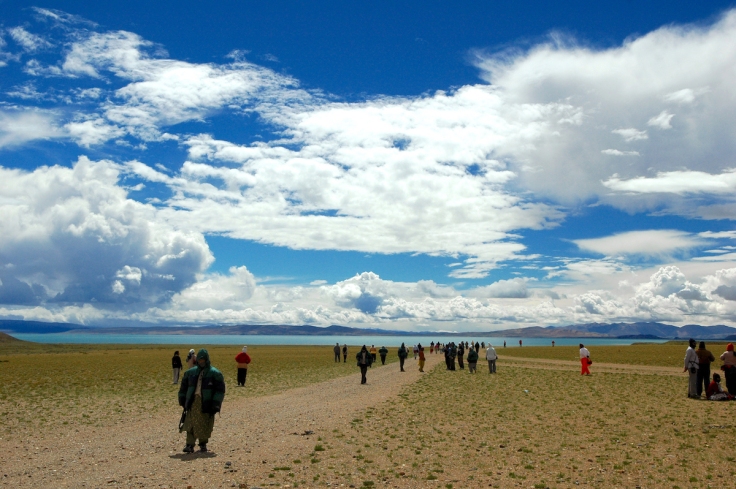 Along the Southern coast of Lake Manasarovar was this beautifully imposing mountain: Gurla Mandhata. 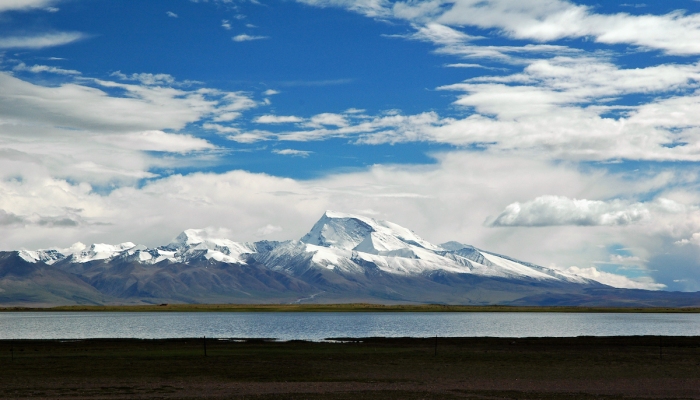 Mount Kailash is ~40 km to the North of Manasarovar. On a clear day we could have seen it. But in the North the sky had turned dark. A storm was brewing, and approaching our way.

And abutting the Western edge of Manasarovar was Rakshas Tal (Lake of the Demons). According to legend, the vile Ravana (from the Ramayana), performed penances here to Shiva (on Mount Kailash) and received mighty boons. Unfortunately for him he did not realize that the powers of the Gods were to be used for the betterment of society, and not for personal gain. Appropriately, as we approached Rakshas Tal, the clouds from the approaching storm had ominously darkened the skies, giving the lake an eerie feel.

It was interesting to note that Rakshas Tal representing evil, is right next to the holiest of Lakes. Perhaps it reminds us that good and evil on this planet are so closely intertwined: like yin and yang. And we need wisdom to distinguish between the two and choose wisely. And it is ever so easy to flip from good to evil and vice versa. And thus the need for divine grace.