The arduous journey across the Tibetan plateau had taken its toll on most of us. While the fabulous vistas and the serene landscape of Manasarovar instantly lifted our spirits, our bodies looked forward to a few days of rest. The toughest part of the tirth yatra (pilgrimage) still lay ahead of us: performing a parikrama of Kailash.

In a temple, Hindus generally perform a pradakshina of the deity by walking around it in a clockwise manner. Mount Kailash is the icy abode of Shiva and Parvati and thus in reverence, we were to perform a parikrama; same as a pradakshina, but walking around the entire mountain. This would take us three days and we had to trek rough terrain, cross streams, climb steep trails, jump from boulder to boulder and traverse a pass high in the mountains at 19,200 ft on the second day – rain, snow or shine. And we would be camping on the mountain side. Coincidentally, the hike over three days was slightly over 42 kms, the same distance as a marathon.

After Manasarovar, we shifted our base to Darchen, a tiny compound of sheds at the base of Kailash. There our tour organizers identified half of our groups as not fit to continue on the Kailash Parikrama. After spending so much money and the long trip I’d have thought these folks would be upset – but not. They were tired and sick, and relieved they could stay back at Manasarovar. Of the rest, 20 were asked to hire and ride horses or yaks around Kailash.

I was one of seven considered fit enough to hike over the three days. I did not feel very confident though. I was still running a fever and having trouble with my breathing (small detail). Here the concept of surrender came to the fore. Yes, we all have to surrender to destiny and move forward. If I had to pass from this world, what better place in the world than on a parikrama of Kailash? And importantly, there was the ego thing: There was no way I was going to return home without doing the parikrama of Kailash.

All of us hired porters to carry our small bag packs which held only essentials for the day. Mine had an extra pair of socks (I hate wet socks), a rain jacket to go over my warm jacket, an extra bottle of water (I carried one bottle on a sling), my secret stash of granola bars, laddoos and other snacks. I carried the camera around my shoulder and bought an inexpensive walking stick locally. The organizers arranged for yaks and porters to carry our tents and kitchen stuff. Several sherpas walked with us carrying emergency medical supplies and oxygen canisters. The folks who did not go on the Parikrama were to camp at Lake Manasarovar with a skeleton crew.

During this tirth yatra, we had to re-acquaint ourselves with the divine. There were none of the material or verbal symbols of divinity here. No temple with stunning gopuras, or exquisitely carved mantapas. No shrines in niches and no priests chanting mantras and performing puja. Many were incredulous and asked: “There is no shrine here? Nothing?” Sorry, you have to engage the mind and see the divine outside the temple, inside your own heart. Realize the nirguna formless, aspect of the divine. Certainly, there was no hundi here to collect donations, either. The divine was all around us and within us.

Ishvar abides in the heart of all beings Arjun; impelling everyone to act as if they are (puppets) mounted on a machine. ~18:61 Bhagavad Gītā

The Land Cruisers dropped us off at the starting point of the parikrama. Just a barren, inhospitable valley with a pebbley trail. It was grey, raining and cold. Not a good way to start a long, tough trek.

Here Tibetans had assembled a mound of stone tablets. Each was exquisitely inscribed with the Buddha’s mantra Om Mani Padme Hum. These are apparently offerings of devotees from bygone eras. Some of the larger tablets had many rows of etched mantras.

A closeup of one of the tablets.

At the start of the parikrama, is a little archway called Yama dvar (Yama’s doorway). This region at the base of Kailash is considered to be the domain of Yama – Hindu God controlling Death. Further having sinned, we were not worthy of performing the parikrama. According to tradition, by passing through Yama’s doorway, we go through death and are reborn: pure of body and ready to perform the parikrama. How cool is that!We got out of our vehicles and huddled in the drizzle. This was a very emotional moment for everyone. Some us would go forward into the cold grey, while others would return to camp. Cameras clicked and flashed; we wished each other well – not certain if we would live to see each other again.

… being reborn? the new brave me!

Here we have just set off on the parikrama on a grey rainy morning it is expected that each of us would travel at a different pace and be separated from the others. Thus each of us is accompanied by our porter, who also acts like our personal guide. For the next three days, we were stuck together and resigned ourselves to Shiva’s care. 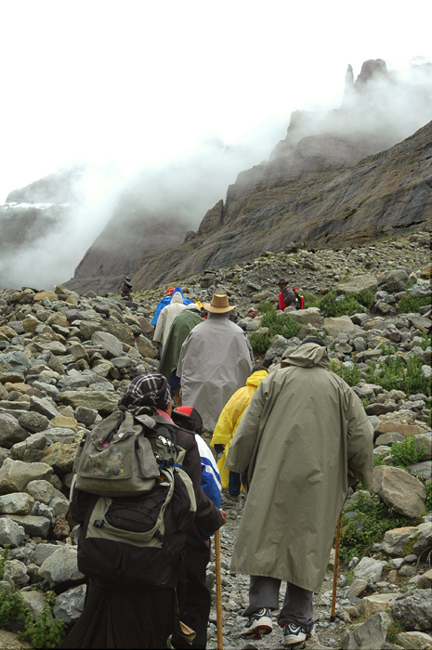 An example of the hulking mountains overlooking our progress on the parikrama, and forming a protective ring of mountains around Kailash.

Talk about devotion. We passed this British lady who was going to perform a namaskar, the entire way around Kailash. She would prostrate for a namaskar, get up, place her feet where her hands were and perform another namaskar, and so on. She wore a heavy leather-like apron on the front to shield here from the rough trail and had wooden flats strapped on her hands. She was accompanied by a couple of sherpas preparing her food and setting up her tents. Our sherpas inquired and found out she was expecting to take 25 days to perform this parikrama.

And here the trail was pretty flat. Later on we would be crossing streams and the next day we had to traverse piles of boulders – up and down – how would she manage? What drives a young woman to such heights of devotion? And a Western woman at that. Such devotion is a grace we should be fortunate to have. Here we Indians were struggling to simply walk around Kailash.

Meet my porter – Pema. When they first assigned her to me – I refused and said I needed a stronger guy to help me around the parikrama (and if necessary pull me out of deep crevasses !!). But the Chinese cartel which organizes the assignment of porters turned a deaf ear and reminded me that this was based on a lottery and I was stuck with her for the next three days.She only spoke Tibetan, which I only knew how to nod to. Through one of the sherpas I find she is 14, like fourteen. She was part of the nomadic tribes which come here during the summer to find such employment. And she had already done this parikrama more than 20 times! I rested my case. And I generously shared my stash of laddoos and granola bars with her! I gave her my walking stick too.

Of course, while I labored in the rarefied atmosphere, she would walk briskly ahead and find a boulder to rest on. While I caught up huffing and puffing she’d would smile, get up and walk on refreshed. heh, what about my rest? Despite being relegated to the backwaters of Tibet and growing up in a nomadic settlement, she was a most charming person. If we had a daughter, she’d be her age.

To start at the beginning of the Kaliash Manasarovar Travelogue, click below:
Rendevous with Sagarmatha (Everest)

104 thoughts on “Kailash Parikrama: A Trek Around Kailash”