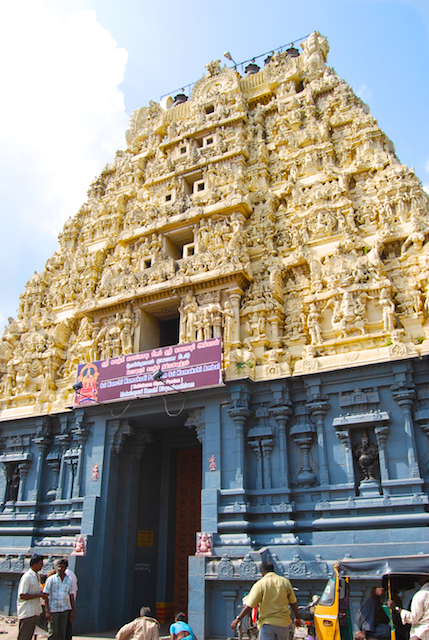 Kanchi is verily the City of Temples. Poems composed in the 2nd century ce refer to a shrine dedicated to the love goddess (Kamakshi – eyes of love). The current Kamakshi temple (Sri Kanchi Kamakshi Peetham Sri Kamakshi Ambal) was built by the Pallavas in the 8th century.

Replicating the original shrine, Adi Shankaracharya installed the Shri Chakra Yantra in front of a beautiful Lalita Kamakshi seated in padmasana – lotus pose. Puja and archana (offering) are made not to the murti, but to the yantra in front – how cool is that!

We got to the temple just before it closes for the mid-day break. After dharma darshan from the mahamandapa, we started to perform pradakshina before leaving the temple. At a side entrance, we noticed a (less than fierce looking) guard let an elderly couple into the inner chamber. I grabbed my father and knowing the traditions here, quickly removed my shirt and pressed into the doorway. As the puzzled guard started to protest, I pressed money into his hands, showed him our janvae – sacred thread, and briskly walked into the dark cave like interior. Working our way towards the front, we met a priest who lead us to be seated directly in front of the Shri Yantra.

Imagine sitting on granite floors, where millennia ago great saints like Shankaracharya sat in meditation; a cave like darkness engulfing you; all eyes are directed to the stunningly beautiful Kamakshi. In the gentle light of oil lamps, her eyes and jewels flicker smilingly, flirting with you, beckoning to her grace. Head bowed, I yielded.

Chanting mantras, the priest offered flowers and kumkum to the yantra. He gave my mother and M flowers. Then plucked garlands from atop the yantra and placed it around my father’s and my neck. Oh, what an indescribable feeling! Like I had been patted by the divine!

In such instances when I am in the presence of the divine, my worries melt away, forgotten, ceasing to exist, scrubbed by one darshan, and my heart lightens in relief. At these times, my brain freezes too and I am unable to even mouth a prayer (I who have written a prayer book). In lieu, I have started to simply ask:

You are the All Knowing!
All perceiving!
I don’t have to ask for anything.
Guide me simply to do your bidding!

This moment here in your grace,
This feeling of overwhelming joy,
Keep it etched Firmly in my memory
For all time!

We performed a namaskar and my eyes glued to the devi, reluctantly moved away. We were all overcome by this unexpected darshan and offered dakshina to the priest. As we walked out, the guard held out the money I had given him. I pointed back to him and the junior priests around – indicating the offering was for them all.

On a inner gopura, I noticed this motif below. Can anyone tell me what deity this is?
Based on the readers comments below, it appears to be Bhairava.

A view of the main gopuras 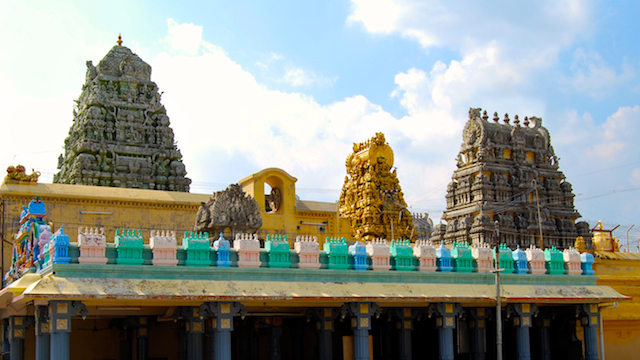 At this stall, I purchased a shri chakra yantra, which now sits on our home shrine.

Other tirth yatras I was fortunate to go on: