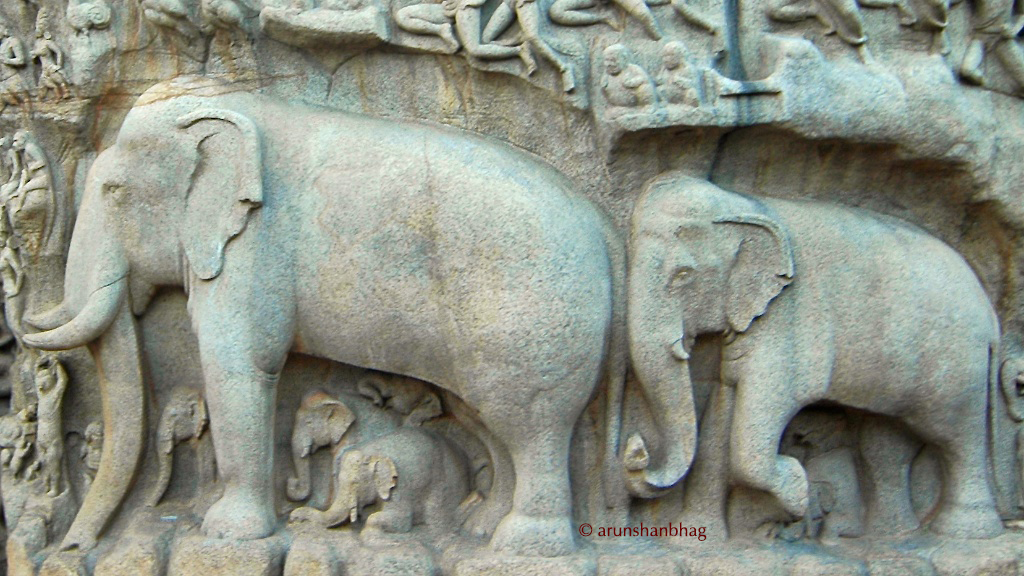 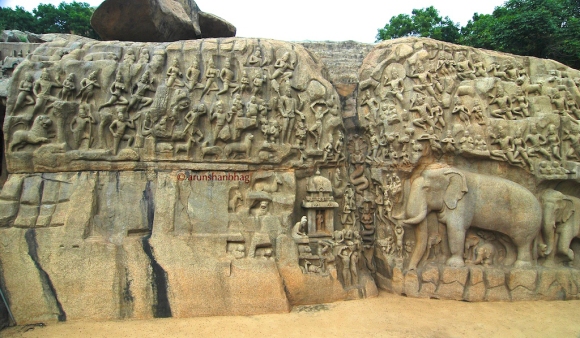 Mamallapuram, about an hour south of Chennai along the East coast, hosts India’s largest and most dramatic relief-sculpture. It represents the celebrated myth of the descent of the river Ganga from heaven to earth. The Great Penance, is carved on a giant granite rock wall 27 meters wide and 9 meters tall, and was believed to be initiated during the reign of the Pallava King Mahendra Varman, ca 7th century ce.

While a traditional sculpture (or other work of art) would memorialize a climactic scene, this Great Penance is depicted as a “continuous narrative,” wherein multiple scenes from a series of events are portrayed on the same canvas, permitting the observer to focus on different parts of the work and recollect different scenes in the narrative. The more details one observes and associates, the more richer the experience.

The legend depicted here is of Raja Bhagiratha who performs penance to Brahmā for a 1000 years, hoping to bring the purifying waters of the heavenly Ganga to earth, to cleanse the souls of his ancestors. In the lower left panel, notice the sage meditating in front of a shrine while attendants sit nearby (their heads destroyed); the ashram setting is completed with a docile lion and a deer sitting nearby. In the depiction, Brahmā has just appeared and offers to send Ganga to earth but warns that the force of her entry would shatter earth. Brahmā thus asks Bhagiratha to appease Shivā for this latter task. 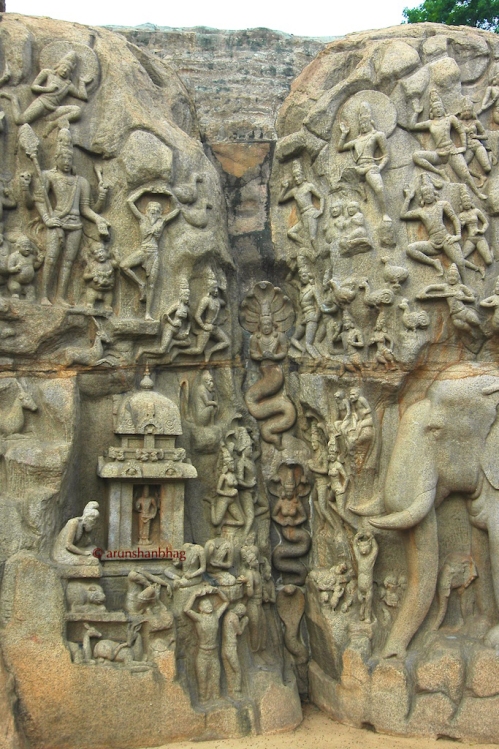 Bhagiratha continues his austerities. In the climactic scene depicted on top, an emaciated Bhagiratha is standing on one leg in vrikshasana, hands raised in urdhva namaskar. His ascetic fervour is conveyed by the shaggy beard and ribs sticking out. Shiva accompanied by several ganas has appeared before the penitent Bhagiratha. In his right hand Shiva holds possibly a trishul and with his left in varada mudra, agrees to break the force of Ganga’s entry in his matted hair.

High in the Himalayas, the thundering Ganga crashes on the head of Mahadev (great God) and after exhausting its energy coursing through his matted hair, flows to earth bestowing upon the faithful its life-enriching boon.

Notice the naturally occurring chasm in the center of the relief. A cistern at the top was believed to release water rippling through the cleft, depicting the waters of the Ganga cascading through the land, purifying, nourishing and blessing all creatures. In this shimmering stream, the undulating bodies of the snake God and his queen, hands folded in bhakti, welcome the life-infusing waters.

Notice Surya and Chandra (the Sun and Moon Gods) with their large halos, on either side of the cleft. Hordes of Devas, Devis and other celestial beings follow. 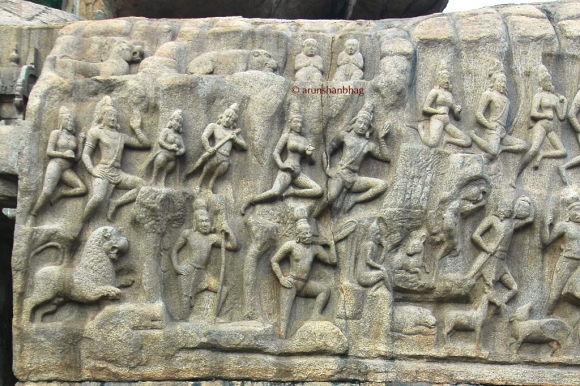 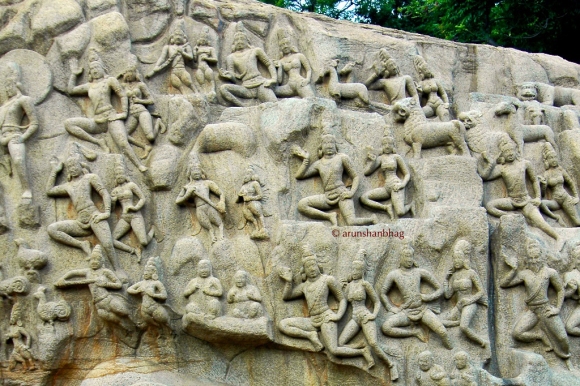 Gandharvas, apsaras and ganas race to catch a glimpse of this miracle; the bent knees create the impression of everyone flying. Even sages, a hunter and a laborer are drawn in. In the center of the tableau above, you see Kinnaras, heavenly musicians with the upper body of humans and the legs of birds, holding a stringed instrument and cymbals. Various ducks, birds and deer too, rush to partake of this miracle. On the lower right of the cleft, we see monkeys curious about this cascading river. And elephants too march to the river!

Eminently cute elephant babes clustered around their parent’s legs; one of them is bowed in namaskar to the divine river. 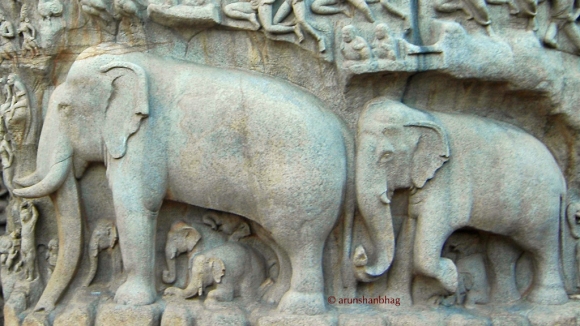 Arjuna’s Penance.
This relief is also referred to as Arjuna’s Penance, depicting the legend where the hero of the Mahabharata, performs penance and receives the pashupata astra from Shiva. Other than this climatic scene, the rest of the tableau does not fit into the legend. Importantly missing is Shiva and Arjuna’s fight over a killed boar. I concur with several scholars and believe this relief to represent Bhagiratha’s penance to bring Ganga to earth.

Other tirth yatras I was fortunate to go on:

26 thoughts on “Great Penance: Descent of the Ganga”