In Mumbai, we had visited the Jijamata Gardens and Zoo (Veermata Jijabai Bhosale Udhyan – PraNisangrahalay) named after Shivaji’s mother who had a positive and lasting influence on a young Shivaji. Mumbai’s premier Museum and International Airport are also named after Shivaji. We have all seen many statues of Shivaji, but this one was unique. The mother grooming and sending her son away, as if to go play, but fight for our beliefs and way of life.

I wish it was placed on a lower pedestal, so we could enjoy it better and it would appear that the young Shivaji was going to join other kids in the garden.

Meera loved the animals in the zoo. She seems mesmerized by the variety of birds. Even at home, every time she spies one in the distance, she points to it.

Before leaving, I had taken a pic of the plaque below the statue. In preparing this post, I noticed that the sculptor was a Vithal Shanbhag Whoa! Shanbhag’s are generationally book worms. Atmost lift a pen, peck at a keyboard or squeeze a camera trigger. Sculpting? He definitely got those genes from his mother. Great job Vithal, you make us proud.

Meera is mesmerized by birds 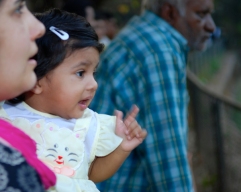 Meera is fascinated by the deer in the zoo

Drawn by the birds 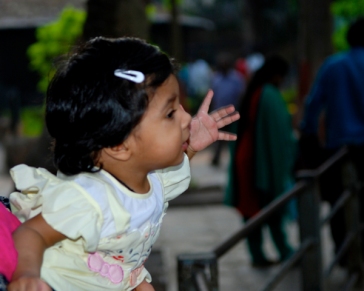 53 thoughts on “Shivaji and Mother; Meera at the Zoo”