Here’s to an even beautiful New Year.

This year I want to eat healthier (it is more challenging in Manipal);

Panchavati gets its name from the five giant banyan trees making up the forested area where Shri Rām, Sitā and Lakshman spent a large portion of their exile. This is the first of the five banyan trees situated in front of the Sitā Gufa (Sitā cave) where she spent a lot of time during her exile.

There is a tiny cave where you can slither along, but I wimped out and waited outside while the rest of the family did the honors. 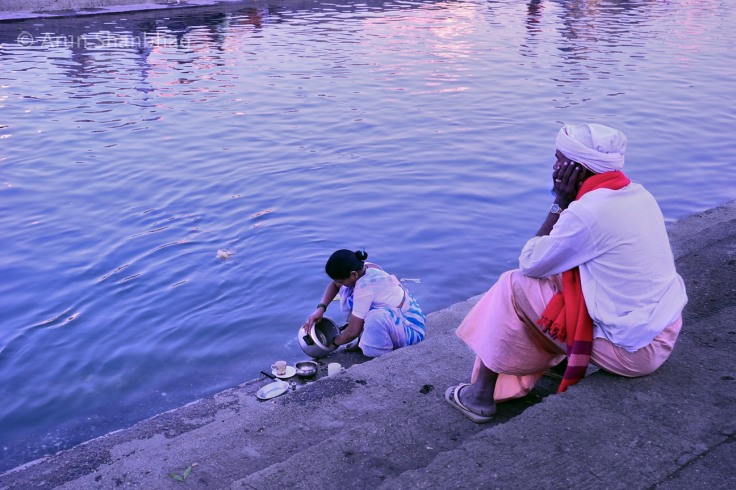 At the ghats in Panchavati, Nāshik, I was intrigued by this sādhu pondering the mysteries of sat and asat, while a lady was busy washing her cooking utensils. Verily a juxtaposition of the paths of Jñāna yoga and Karma Yoga. Which path to follow? This is a difficult decision for many to make. If you have not (yet) come across this quandary, consider yourself lucky. 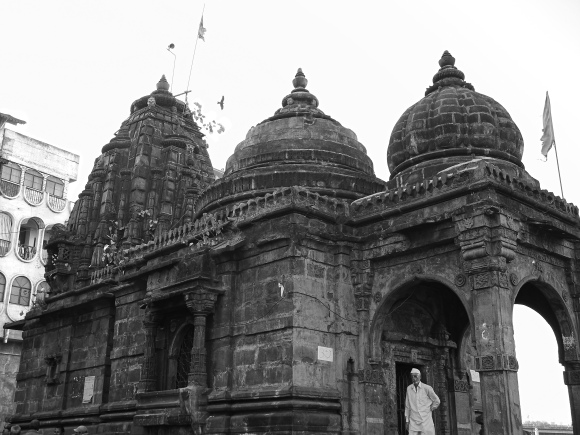 Panchavati is an amazing city with some very ancient and beautiful temples, and some very big problems of governance. The sacred temples get easily overshadowed by the trash everywhere and the lack of respect for the sanctity of this place. And it was not even the Kumbha mela. This tiny temple, the Neelkanteshwar Mahadev Mandir established in 1662 on the Ram Kund demonstrates the confluence of urban growth, apathy and the sacred. In dire need of the Swachh Bhārat Abhiyan. END_OF_DOCUMENT_TOKEN_TO_BE_REPLACED 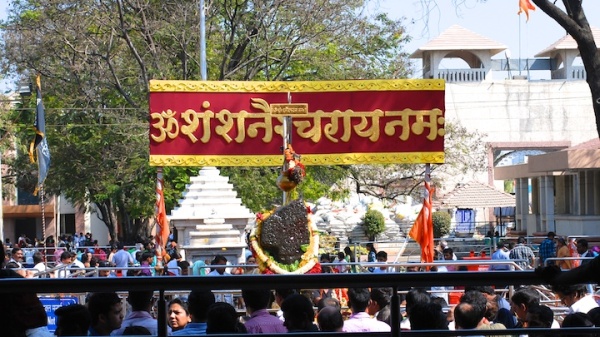 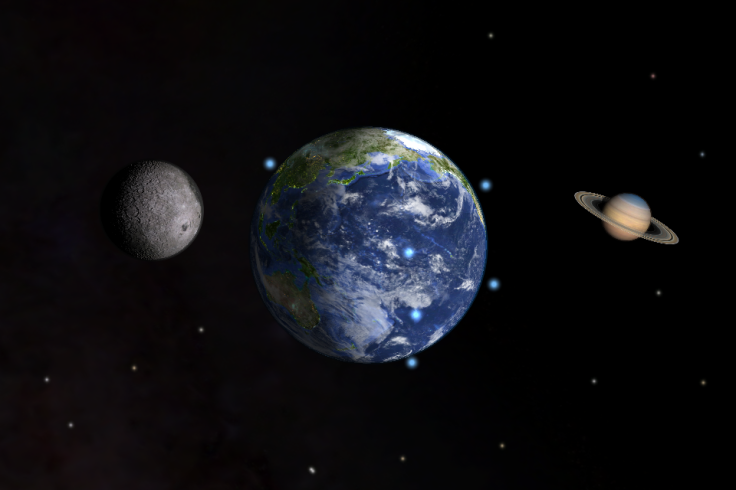 Saturn has an outsized effect on the Earth; screen grab from Sky Walk app on iPhone

The gravitational pull of the moon causes the seas and oceans to bulge outwards resulting in tides, which affect all life on earth in dramatic ways. (Note: Latest research shows Moon phases also affect sleep cycles in Humans.) Vedic astrology (Jyotish) asserts that the nearby nine celestial bodies and phenomena also have unique effects on humans on earth. Thus Hindus recognize and respect the nine celestial phenomena (Navagraha) at the beginning of all Hindu pujas (religious services).
END_OF_DOCUMENT_TOKEN_TO_BE_REPLACED

Growing up in Mumbai, chikkis were our treats. Local kirana dukkan (stores) had a assortment of chikkis available for a pittance. Chikkis are the traditional Indian candy bars before there were candy bars. PiPi (fennel candy) was our other delicacy. The simplest chikki’s are roasted peanuts in a gooey, crunchy slab of jaggery (see Making Jaggery). Chikkis are made with every imaginable grains or nuts including peanuts, rajgira (amaranth), sesame (black, white), coconut (desiccated), rice (puffed), mango, cashews, pistachios and almonds. The closest equivalent in the US would be peanut brittle, but the indian chikki is typically nuttier and crunchy. END_OF_DOCUMENT_TOKEN_TO_BE_REPLACED 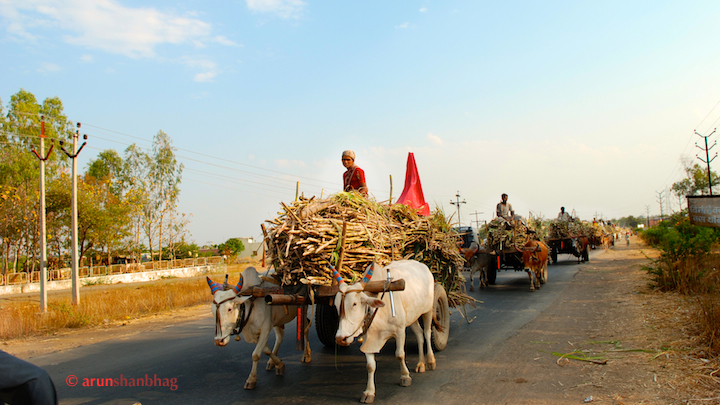 Enroute from Aurangabad to Paithan in Maharashtra State, India. This is quite a common site when driving around rural India. Because such long trains of bullock carts hamper other vehicular traffic and cause backups, our first impression is to curse them out, “why can’t they just stay off the road?” END_OF_DOCUMENT_TOKEN_TO_BE_REPLACED 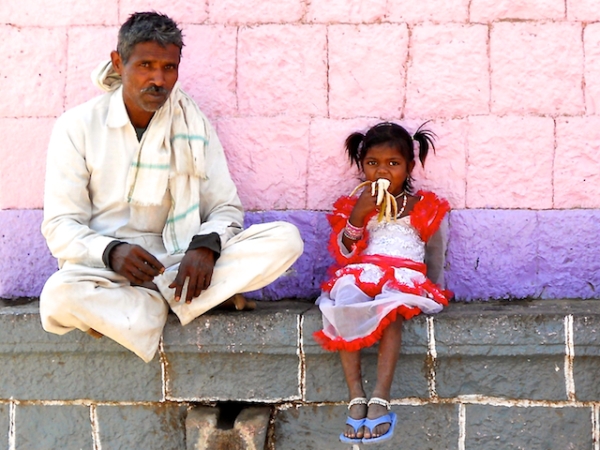 During our AstaVinayak (Eight Sacred Ganapati Temples) tour, we stopped at a roadside eatery in rural Maharashtra. After a simple meal (roti & sabzi for us, yogurt and rice for Meera), I ambled over to the village square. END_OF_DOCUMENT_TOKEN_TO_BE_REPLACED 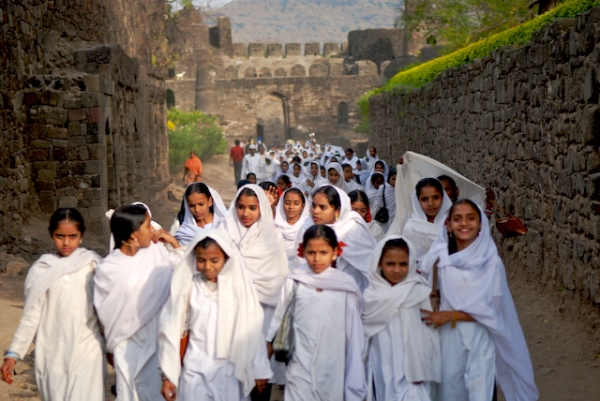 These pics continue from my previous post on visiting the Daulatabad Fort at Deogiri and the related post on the beautiful bullock cartstransporting sugarcane to the mills. I loved them so much, they had to get their own post. You can see larger versions of these on my photo-blog Arun Eyes … this wondrous life just to showcase my favorite pics. END_OF_DOCUMENT_TOKEN_TO_BE_REPLACED

Daulatabad, previously known as Deogiri (Hill of Gods), was founded by Raja Bhillama of the Yadava dynasty in the 11th century of the current era. Raja Bhillama renounced his allegiance to the Chalukyas, and after victorious campaigns against neighbors, retained control of the strategic Deccan with his capital at Deogiri.

Having heard of the wealth of the land, Alauddin Khilji marched down, destroyed the town and laid siege to the fort in 1294. After a 3-week stand-off, Raja Ramachandra Deva surrendered on payment of a record tribute which had to be carted off on elephants and camels. The tribute was believed to include 54,000 lbs of gold, 560 lbs of pearls, 160 lbs of precious stones, silver, silk and adjacent towns. This was the first time Muslims had penetrated as far south as the Deccan. Fresh with booty, Alauddin schemed and murdered his uncle Jalauddin Khilji and ascended the throne in Delhi in 1296. And a few years later Alauddin would lust after Padmini, ending tragically in the massacre at Chittor. END_OF_DOCUMENT_TOKEN_TO_BE_REPLACED