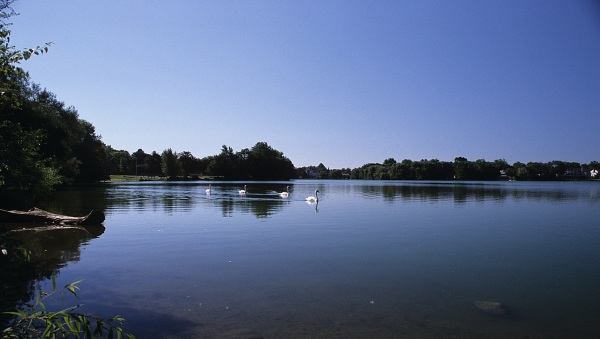 Just a few minutes from our home is a small lake, where parents take their young kids for boating lessons and quiet picnics. Also, where I rushed to try out my new, all manual camera. Its a real beauty, solid metal and weighs a ton. The clang of the shutter is so reassuring, compared to the muffled click of the new featherweight digi-cams. [Added in post script (2014): My newer Fujifilm X100T looks so much like the FM3a.]

When I took this pic early in the morning, the pond was calm and serene, disturbed only by the ripples of the gliding swans. A little later in the day, screaming kids will be chipping stones. The turquoise sky and water reminds me of the song, “Neele Neele Amber Per (Alamgir)” from the “Kantaa Lagaa, Remix.” It was this song which inspired me to compile and share my Blue Skies pics.